The opening ceremony of the first of the two plants of SOCAR Polymer, a polypropylene plant built in the Sumgait Chemical Industrial Park, with a production capacity of 184,000 tons per year will be held on July 18.

The annual production capacity of the plant for the production of polypropylene, will be 184,000 tons. The supplier of raw materials for the plant is Azerkimya PU. After launching to full capacity, the plant will purchase 23 tons of propylene per hour from the Azerikimya as feedstock.

At present, Azerbaijan imports polypropylene and thanks to the launch of the plant, it is planned to fully meet domestic demand and increase export potential.

The SOCAR Polymer project is the first such scale in the petrochemical industry of Azerbaijan for the last 40 years. Along with the polypropylene plant, it includes the construction of a plant for the production of high density polyethylene with a capacity of 120,000 tons per year. The second plant will be put into operation in the last quarter of this year.

It is expected that 30 percent of the products will be sold on the domestic market, the rest will be exported to Turkey, Europe and the CIS countries.

SOCAR Polymer was established in July 2013 to accelerate the development of the chemical. The company received the status of the second resident of the park. SOCAR Polymer covers 30 hectares of the park territory.

The total cost of SOCAR Polymer plants is estimated at $750 million. In the structure of investments, 60 percent is secured by creditors, 40 percent by shareholders.

Nitrogen installation for plants for the production of polypropylene and high density polyethylene based on the most advanced technical and engineering solutions.

The production of raw materials at the SOCAR Polymer plants will contribute to the creation of hundreds of small and medium-sized enterprises and to the development of production of various types of import-substituting products. According to calculations, the activity of the plants producing polypropylene and high-density polyethylene SOCAR Polymer will yield an income of $8 billion.

SOCAR is a wholly state-owned national oil company headquartered in Baku, Azerbaijan. The company produces oil and natural gas from onshore and offshore fields in the Azerbaijani section of the Caspian Sea.

The company includes three production associations, one oil refining and gas processing enterprise, an oil flotilla, a deep-water base plant, two trusts, one institute, and 23 structures. 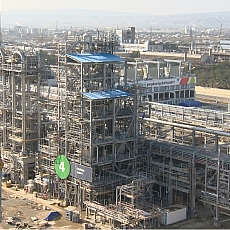